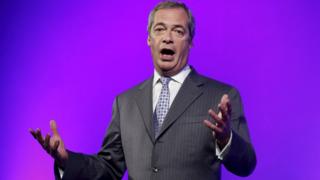 The campaign to leave the EU is a “united force” and heading for an “historic” victory, Nigel Farage has told his party conference.

The UKIP leader said the in/out referendum pledged before 2018 was “the moment to put country before party”.

It could be won with a “big strong, positive message”, he predicted.

He also told supporters UKIP could “hold its head high” and was “alive and kicking” after the general election when it won just one seat.

UKIP had done “far more” damage to the Labour vote than the Conservatives in May, he added.

Mr Farage hailed a “show of unity” of anti-EU groups, who have formed a group called Leave.eu to push for a UK exit.

UKIP would stand “hand in hand” with this new “umbrella group”, he said, suggesting it should become the official Out campaign.

“We are together, we are united, and we …read more

Crash victims may have lain for days

Corbyn in Labour contest 'for real'

Man dies after car fell on tree during...