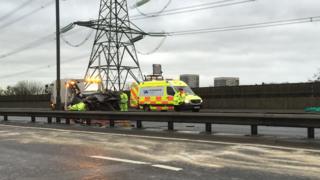 Drivers have faced long delays due to the crash

Drivers are being warned about long delays after part of the M6 in Birmingham was shut due to a fatal collision involving a lorry and a car.

The northbound carriageway was closed at about 02:00 GMT at junctions five, Castle Bromwich and six, Spaghetti Junction.

The man driving the car was confirmed dead at the scene. The lorry driver was shaken but uninjured, paramedics said.