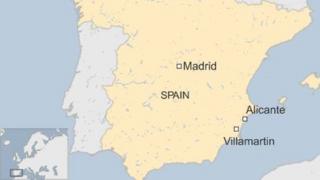 A British national has died in Spain and four Britons have been arrested, the Foreign Office has confirmed.

It comes amid reports of a man being stabbed in the neck with a broken bottle in a fight in a bar used by expatriates in a Costa Blanca resort.

The incident allegedly occurred in the early hours of Saturday morning in the bar in Villamartin Plaza, in the resort of Orihuela Costa, south of Alicante.

The Foreign Office said it was ready to provide consular assistance.

“We can confirm the death of a British national in Alicante, Spain on 16 January 2016,” a spokeswoman said.

“We are in contact with the local authorities and stand ready to provide consular assistance to the family at this difficult time.”

Leader, an English newspaper in the Costa Blanca, said the case was being dealt with by the Judicial Police in Pilar de la Horadada, a town in the Alicante province.

METER BRIDGE – IT WAS NOTHING + RODNEY CROMWELL REMIX