Brad Pitt says he hopes his new film Fury shows respect to the soldiers who fought in World War Two as it closes this year’s London Film Festival.

Pitt plays the commander of a Sherman tank and her five-man crew on a mission behind enemy lines in 1945.

The film, which is out on Friday, has its European premiere in London’s Leicester Square later.

“Our wish is the soldiers themselves feel they were respectfully recognised,” said the actor.

“War is hell,” he told a press conference on Sunday. “It is an amazing fact of human nature that one year we can be chopping each other up [and] the next we can be sharing a pint.

“We continually devolve into conflict, no matter how much we evolve.”

The 50-year-old was working on Fury at the same time his wife Angelina Jolie was directing her forthcoming WWII film Unbroken, which stars Jack O’Connell as an Olympic athlete taken prisoner by Japanese forces.

“It was a lovely experience, we don’t normally work at the same time,” said Pitt, who previously played a soldier in Quentin Tarantino’s Inglourious Basterds. 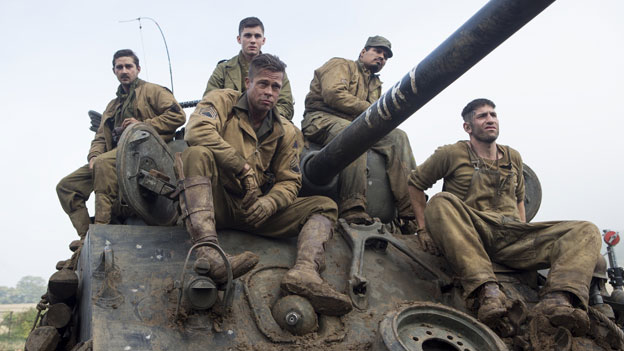 Fury’s director, David Ayer, said it was a “privilege” to close the BFI London Film Festival with a film shot in the UK – specifically around Oxfordshire and at Bovingdon Airfield in Hertfordshire.

Tony Blackburn reveals his folk band past at...