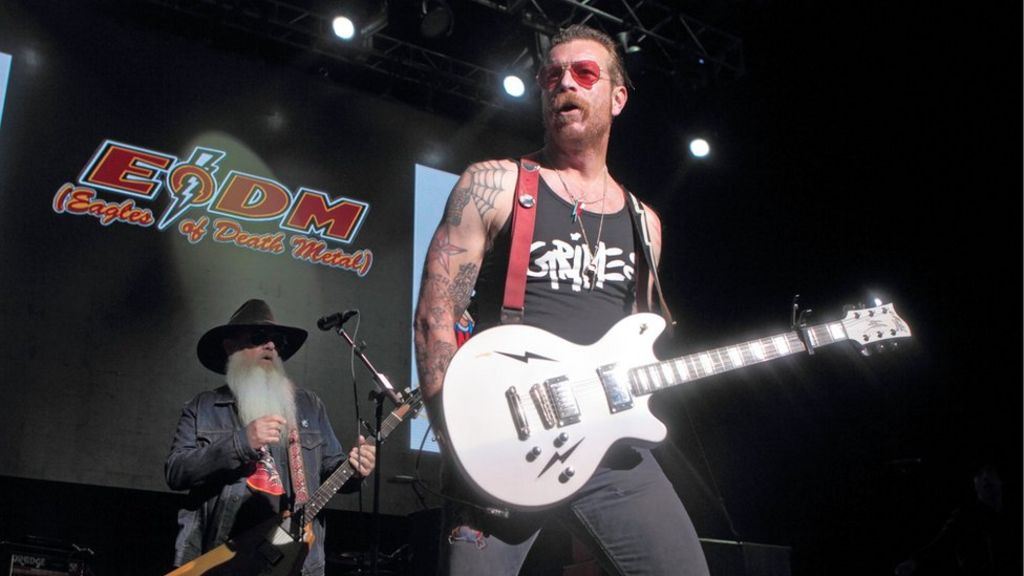 Eagles of Death Metal have been dropped from two French music festivals, after their singer reiterated his suggestion that security at the Bataclan was complicit in 2015’s terror attacks.

Ninety people were killed at the venue last November when gunmen opened fire during the band’s set.

Singer Jesse Hughes suggested in March that some security guards may have known in advance about the attacks.

Despite apologising, he repeated the statements in a US interview last week.

The Bataclan venue has previously condemned his earlier remarks as defamatory.

“There’s no denying the terrorists were already inside, and they had to get in somehow,” Hughes told Gavin McInnes in Taki’s Magazine last week.

“During the shooting I went outside and the backstage door was propped open. How did that happen?”

Following publication of the interview, organisers of the Rock En Seine and Cabaret Vert festivals have dropped the band from their line-up, saying they are “in total disagreement with Jesse Hughes’ recent allegations”.

The Bataclan, having called the singer’s earlier comments “grave and defamatory”, called in March for speculation about the tragedy to be kept to a minimum.

“A judicial investigation is undergoing. We wish to let justice proceed serenely,” they said in a statement.

“All the testimonies gathered to this day demonstrate the professionalism and courage of the security agents who were on the ground on 13 November. Hundreds of people were saved thanks to [their] intervention.”

Hughes subsequently apologised and retracted his comments, saying they were “unfounded and baseless”.

“I humbly beg forgiveness from the people of France, the staff and security of the Bataclan, my fans, family, friends and anyone else hurt or offended by the absurd accusations I made,” he said of his initial comments. “They do not reflect opinions of my bandmates or anyone associated with Eagles of Death Metal. The shame is 100% mine.”

It is unclear why the musician has revisited his comments now, although McInnes, who co-founded Vice and is a frequent commentator on Fox, is known for being provocative.

Last year, the writer was asked to take an “indefinite leave of absence” from Rooster, an advertising company he set up, after publishing an article titled “Transphobia Is Perfectly Natural” on a website called Thought Catalog.

Hughes has said he is suffering from post-traumatic stress disorder stemming from the Bataclan tragedy, which also took the life of the band’s merchandise manager Nick Alexander.

An inquest into Alexander’s death closed on Thursday, …read more