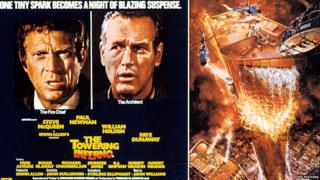 The Towering Inferno starred two of the biggest box office stars in the world, Steve McQueen and Paul Newman

British director John Guillermin, whose films included The Towering Inferno and Death on the Nile, has died aged 89.

He died on Sunday at his home in the Topanga Canyon area of Los Angeles, his friend Nick Redman confirmed.