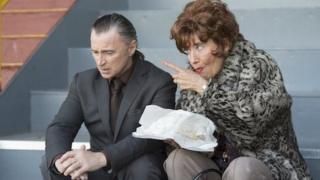 Actors Emma Thompson, Ken Stott and Sharon Rooney were among the winners at the Bafta Scotland awards in Glasgow.

The Legend of Barney Thomson, directed by Robert Carlyle, who also stars in the film, won two awards – including best film.

And Glaswegian Bill Paterson won a special award for outstanding contribution to film and television.

The 70-year-old has appeared in dozens of hit films and TV shows including The Killing Fields and Auf Wiedersehen Pet.

Paterson, who stars in the soon-to-be-released Dad’s …read more

Finding Dory holds off Tarzan and BFG at...

Drake is Spotify's most-streamed artist of 2017