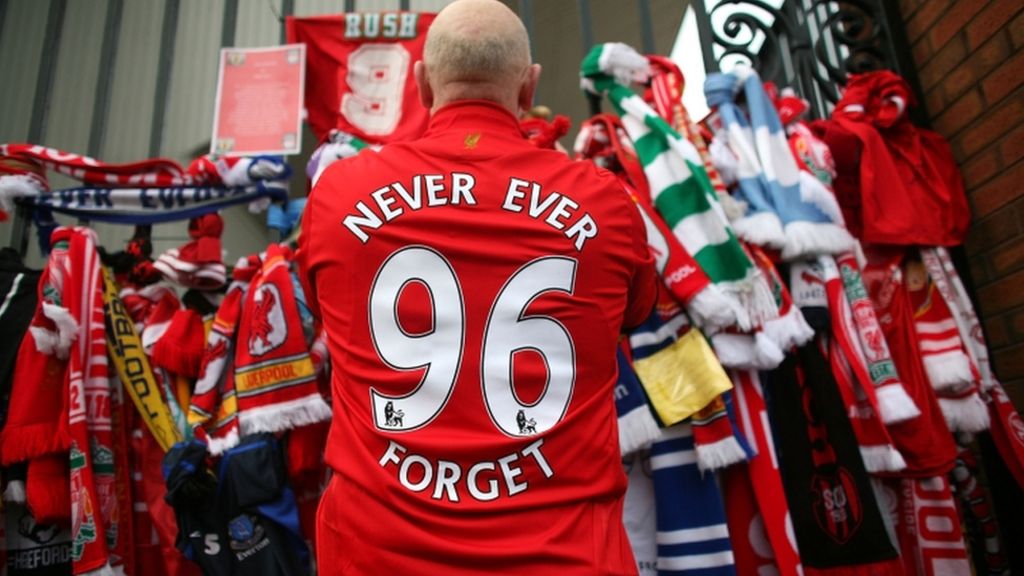 The final Anfield memorial service for the 96 victims of the Hillsborough disaster will be held later.

The annual event has been held at Liverpool’s stadium since the tragedy in Sheffield on 15 April 1989.

In January, relatives of the victims said they had “unanimously agreed” this year’s service would be the last.

A minute’s silence will be held across Liverpool at 15:06 BST – the exact time when the FA Cup semi-final was abandoned following a terrace crush.

Bells will toll 96 times at the Liverpool Metropolitan Cathedral and Town Hall, while flags at civic buildings will be flown at half-mast.

The Mersey Ferry will sound its horn and the Mersey Tunnel barriers will be lowered for a minute.

Public transport and shops in the city centre have also been encouraged to observe the silence.

On Thursday night, as Liverpool hosted Borussia Dortmund in the Europa League quarter-final, Anfield held a minute’s silence before kick off as the Kop spelled out “96” in white mosaic tiles.

With the players on the two sides wearing black armbands, the fans of both teams joined in a resounding and sustained rendition of “You’ll Never Walk Alone”, the Liverpool anthem.

Liverpool Mayor Joe Anderson said: “We will never forget those who died at Hillsborough, and this is a day for us to unite as a city, and remember each one and also their families and friends left behind.”

In January, Margaret Aspinall, chair of the Hillsborough Family Support Group (HFSG), thanked the club for hosting the service for 27 years.

“We hope that the public and fans respect the decision of the HFSG and will continue to remember the 96 in their own perhaps more private way,” she said.

Earlier this month, the jury at new inquests into the disaster retired to start considering its conclusions about how the fans …read more