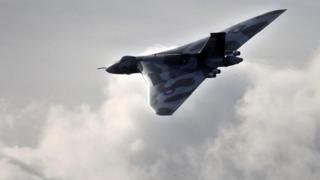 The XH558 bomber, which saw action during the Falklands War but was withdrawn in 1984, is to appear at Shuttleworth, Bedfordshire.

Dawn Sunrise, who lives near Bedford, said she grew up with the plane, which was piloted by her father for the RAF.

“I’ll be saying goodbye to a childhood friend,” she said. “It’s going to be very emotional.”

Theresa May under pressure over Trident missile test