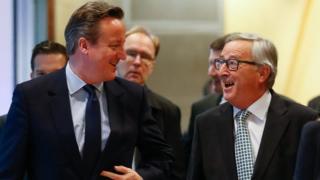 David Cameron is gearing up to meet EU leaders after European officials hold a final day of talks on the UK renegotiation draft deal.

The PM hopes to finalise the deal at the summit starting in Brussels on Thursday, enabling a referendum on the UK’s EU membership as early as June.

European parliament president Martin Schulz has warned that MEPs’ backing for any deal cannot be guaranteed.

Mr Cameron’s planned curbs to child benefit for EU migrants appear to be a sticking point in the talks with the EU, with unease from eastern European countries.

Czech Europe minister Tomas Prouza told BBC News that he expected the proposals would only apply to new applicants, and not affect the existing 34,000 migrants in the UK who were recipients.

Downing Street has so far refused to say whether the changes extend to existing claimants or not.

European Commission President Jean-Claude Juncker said he expected the proposed benefit changes to be at the heart of debate this week.

Our correspondent Chris Morris said: “In addition, France is just one of a number of member states anxious to ensure that nothing in the deal would allow financial institutions in the City of London to benefit from lighter regulation than their continental counterparts.”

Ska Keller, vice-chairwoman of the Greens and European Free Alliance group of MEPs, said it was “very important” the final agreement did not include discriminatory measures and said the plans would not simply be nodded through.

She told BBC Two’s Newsnight that EU and …read more