Fire breaks out at London mosque 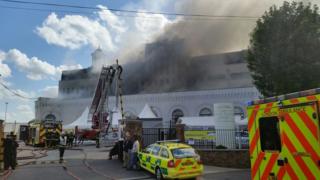 The mosque has a community centre attached to it

A fire has broken out at a mosque in south London.

A London Fire Brigade (LFB) spokesman said 70 firefighters and 10 engines were tackling the blaze at the Baitul Futuh Mosque in London Road in Morden.

He said about 50% of the building’s ground floor was alight and the first floor was also on fire.

A London Ambulance Service spokesman said a man was taken to hospital suffering the effects of smoke inhalation.