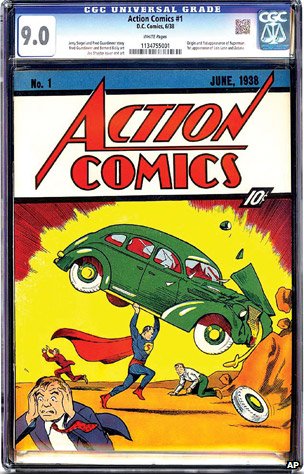 Some 200,000 copies of the comic were printed in 1938 – but very few have survived in good condition

One of the best-preserved copies of the first Superman comic has sold for $3.2m (£1.9m), a record price for a comic book, according to eBay.

Only around 50 unrestored originals are thought to have survived, and this was described as the most immaculate.

New York dealers Metropolis Comics said they bought it. It beat the previous record of $2.16m (£1.4m) set by another copy of the same comic in 2011.

The latest copy to be sold was given a nine out of 10 rating for its condition and has white pages, according to independent comic book grader Certified Guaranty Company.

It had been kept in a cedar chest in a home in West Virginia after being bought in 1938, according to seller Darren Adams.

After the owner’s death, the family sold it to a dealer in the early 1980s and it was eventually sold to Mr Adams, who runs the Pristine Comics shop in Washington state.

Stephen Fishler of Metropolis Comics told the Associated Press the opportunity was “just too good of an opportunity to pass up”.

He said: “It’s hard to believe that a kid’s 10 cent comic could be worth that much money, but it is Superman.

“That’s an iconic thing. It’s the first time anybody saw what a superhero was like.”

The edition sold in 2011 was also rated nine out of 10 but its pages were faded.

One percent of the proceeds of the latest sale will go to the Christopher and Dana Reeve Foundation, the paralysis charity named after the late Superman actor and his wife.

Dr. Grays Reasons Why He Does Not Support The ALS Ice Bucket Challenge

Benefits Street up for industry gong