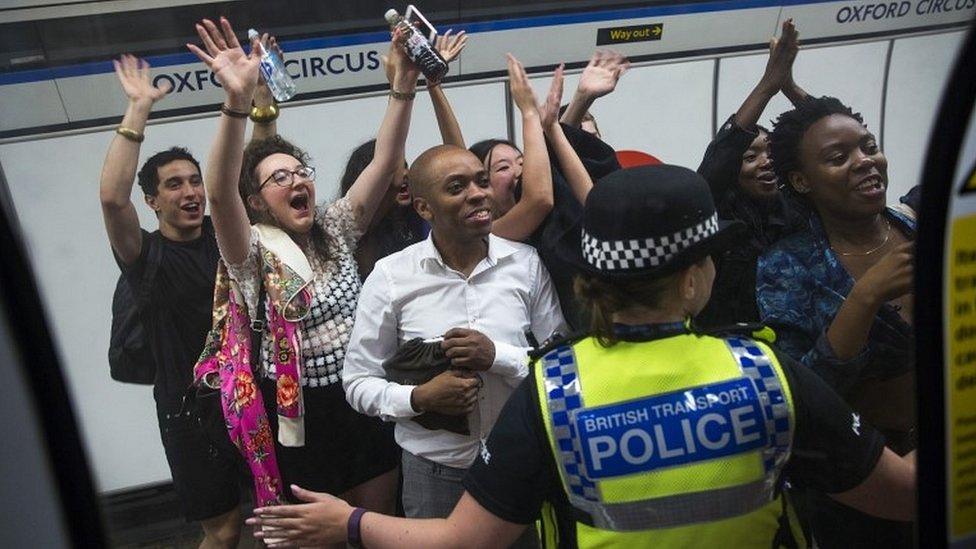 More than 100,000 journeys were completed by people on the Night Tube during its first weekend of operation, Transport for London (TfL) has said.

Some 100,300 trips were made on the Victoria and Central lines as services ran overnight on Friday and Saturday.

British Transport Police (BTP) said one person was arrested but added the service was “safe and trouble-free”.

Mayor of London Sadiq Khan said the service had “changed the face of weekend travel forever”.

About 100 police officers patrolled stations and platforms as services were extended between 00:30 and 05:00 BST.

A 17-year-old teenager was arrested on the Victoria line platform at Oxford Circus at about 02:00 on Sunday on suspicion of possession of drugs and carrying a bladed article.

However, Ch Insp Dominique Ioannou said the Night Tube was “a historic event for London” and hailed the “great atmosphere throughout”.

There were no reports of any major problems apart from a signal failure which delayed trains between Woodford and Loughton on Saturday morning.

Many who used the Night Tube said they were impressed with the service.

Passenger numbers are predicted to reach 200,000 once it is extended to the Jubilee, Piccadilly and Northern lines in the autumn.

Rig grounded on Lewis beach towed away by two tugs

Tests due on human head found at quarry