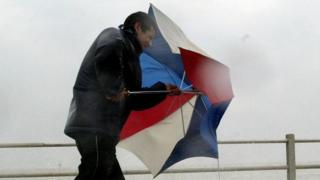 People in large parts of Scotland and northern England have been warned to prepare for flooding as Storm Desmond continues to bring heavy rain.

Two severe flood warnings, indicating potential danger to life, are in place for the River Tyne in Northumberland.

The Met Office has issued an amber “be prepared” warning for rain across parts of central and southern Scotland, and Tayside and Fife until Sunday morning.

It also warns Northern England could see up to 200mm of rain on high ground.

Strong winds battered the UK overnight and are set to pick up again later, reaching speeds of 60-70mph in some areas.

Impacts of the adverse weather include:

80 flood warnings and alerts are in place in Scotland, and some main roads closed due to landslides and flooding
Properties in Hawick, in the Scottish Borders, have been evacuated over concerns about the River Teviot
Several Scottish Premiership matches are postponed, …read more

Many 'suffer silently' over continence