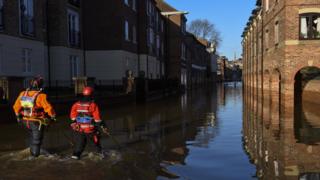 Rivers burst their banks in York in December, flooding streets

“People will always come first” in the battle to defend the UK against flooding, the Environment Agency’s chief executive has said.

“If we have to choose between people and wildlife, we will always, of course, choose people,” Sir James Bevan told BBC Radio 4’s Today programme.

The agency had enough money to tackle the problem and would dredge rivers “where it makes sense”, he said.

Many areas of the UK have suffered flooding after weeks of heavy rain.

There are still dozens of flood …read more