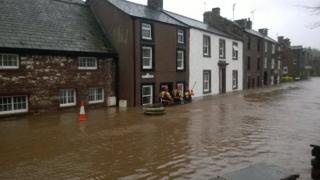 Appleby in Cumbria has seen some of the worst flooding

Flood waters are expected to reach their peak later as Storm Desmond continues to cause severe disruption across northern England and Scotland.

More than 1,000 people have been evacuated from their homes in parts of Cumbria and the Scottish Borders.

More than 50 severe flood warnings are in place with water levels expected to peak in Carlisle at around 09:15 GMT.

Rain is now moving towards south-east England and showers are expected in the North West for the rest of Sunday.

More than 60,000 residents are without power in Lancaster, Lancashire, and large parts of Cumbria while eight rescue centres have been opened in the county as the emergency services battle against rising flood waters.