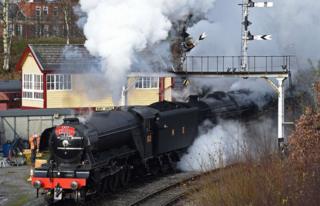 One of the world’s most famous locomotives, returns to the West Coast mainline on Saturday.

Flying Scotsman is scheduled to travel from Carnforth on the West Coast Main Line following a £4.2m restoration project, which has taken 10 years.

The engine, which was retired from service in 1963, has been restored for York’s National Railway Museum by Riley and Son Ltd, based in Bury.

Low-speed tests have taken place along the East Lancashire Railway.

The locomotive will be in its black …read more

Farron 'to get Lib Dems back in power'