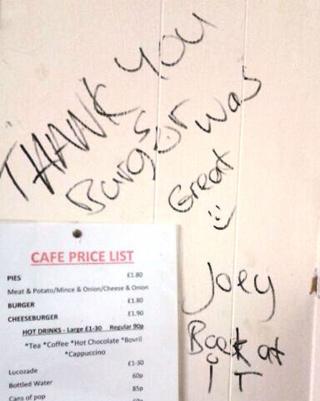 The theft happened over the weekend

Burglars broke into an amateur football club’s cafe and cooked burgers on a griddle before leaving a “thank you” note scribbled on the wall.

The thieves also stole around 10 bottles of spirits from Colne Football Club’s clubhouse in Colne, Lancashire.

Volunteers found the message that read, “thank you burgor (sic) was great” before signing off with “Joey back at it” and a smiley face.

She said: “It’s cheeky; they are rubbing our noses …read more

Shock at deaths of girl and father

Fire at indoor market and bowling alley in...