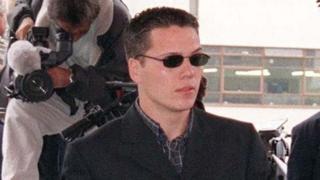 Jamie Acourt, pictured in 1998, has always denied involvement in the killing of 18-year-old Stephen Lawrence

One of the original suspects in the Stephen Lawrence murder inquiry is on the run from police.

Jamie Acourt, 39, from Bexley, is wanted by officers for drugs offences.

A Met Police spokesperson confirmed Mr Acourt was wanted “in connection with an investigation, namely, conspiracy to supply drugs”.

It is alleged that Mr Acourt is part of a gang, with links to London and the North East, accused of supplying …read more

Police called in after 'unrest' at HMP Bedford

No-one in MI6 to face charges after Libyan...