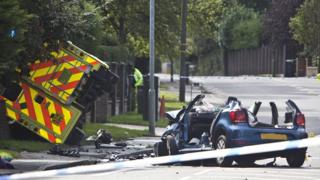 Four people were injured in the crash in St Albans

Four people have been injured in a crash involving a car and an ambulance responding to an emergency call.

No patient was on board at the time but two ambulance staff and two members of the public were hurt. All four were taken to hospital.

The ambulance was on its way to a 999 call-out. The patient was treated by other paramedics.