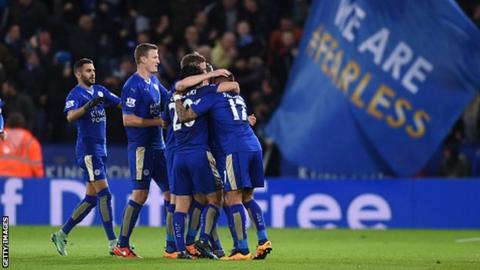 The Foxes are closing in on an unlikely triumph after going five points clear at the top with seven games to go.

But their meteoric rise has left former Leicester striker Lineker feeling “like a big jelly on a plate”.

He told BBC Radio 5 live: “This is actually quite agonising. It turns you into a big bag of nerves.”

Lineker, who scored 48 goals for England, added: “I’ve never suffered from nerves in my life.

“I’ve taken a penalty at the World Cup and never felt a thing.”

In Short: Everybody in Europe wants to see Leicester City win – Martin O’Neill

A big fan of his hometown club, Lineker, 55, says he plans to stay away from Leicester games for the time being because he does not want to “spook” their title chase.

“Ever since I started to go and watch them play, which is never that often because I generally work Saturdays, I’ve never seen them win,” the Match of the Day presenter said.

“So, what do I do? You know what, I’m not going to. I’m just going to keep watching on TV because that’s been all right.

“I just don’t want to spook the whole thing up, so I’ll carry on.”

Lineker said he was planning to watch them play Manchester United at Old Trafford on 1 May but said that might change.

“I shall make a judgement nearer the time,” he said.