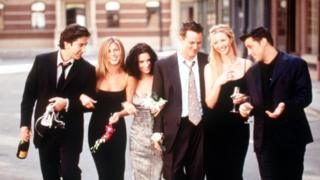 Friends reunited? Cast of famous sitcom sign up for special

The cast of the hit sitcom Friends are to reunite for a two-hour special, according to US broadcaster NBC.

The actors behind Rachel, Monica, Phoebe, Joey, Chandler and Ross have all signed up for the special, a tribute to director James Burrows.

Burrows helmed numerous episodes of the programme and has just celebrated directing his 1,000th TV programme.