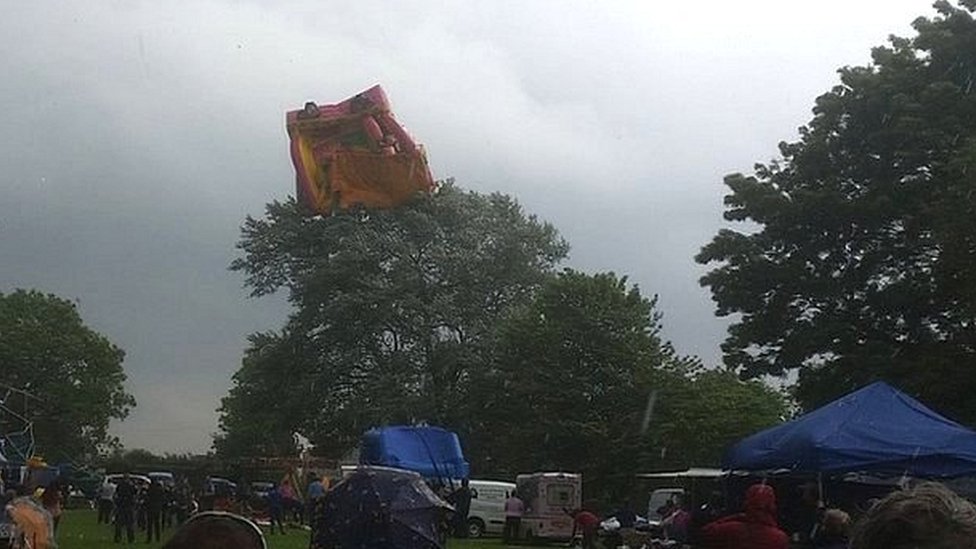 A funnel cloud lifted an inflatable slide into the air at a Lincolnshire country show.

Eyewitnesses at the Friskney Show, near Skegness, reported the inflatable taking off at about 13:20 BST and sailing about 30ft up in the air before landing on a nearby road.

No-one was on the slide at the time as it had already closed when the weather started to change.

Several stalls were damaged and a car’s rear windscreen was smashed.

Sam Stanhope, who was at the show, said: “It got extremely windy, it was very weird. We saw people screaming and I turned around and saw the slide going up into the air.

“It landed slap bang in the middle of the road and we ran over as we weren’t sure if there was anyone on the slide.”

Vanessa Butler, who owns the inflatable, told BBC Look North the slide was cleared as it was raining and “a sudden gust” took it into the air despite it being “securely fastened”.

She said: “We had two bouncy castles there, the other was still there, absolutely fine.”

Mr Stanhope, from Wrangle, Boston, said organisers decided to allow the show to carry on after no-one was reported injured.

“In true British fashion they decided to continue and ten minutes later that had the belly dancers on,” he said.

A Met Office spokesperson said it was most likely to be a funnel cloud, with “severe convection” seen in east Lincolnshire on Sunday.