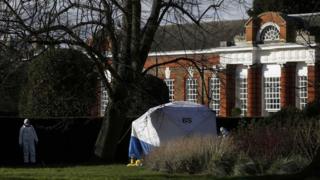 Amin Abdullah was found on fire outside the palace at about 03:40 GMT

A nurse who set himself on fire outside Kensington Palace after being sacked was “treated disgustingly”, his partner has said.

Amin Abdullah, 41, died after dousing himself in petrol outside the London palace days before his appeal hearing.

He had been in a suicidal state after losing his job and was admitted to hospital for treatment.

Imperial College Healthcare NHS Trust said it will “engage fully with any investigations” into the death.

Mr Abdullah was dismissed from Charing Cross Hospital in December for gross misconduct after writing a letter in support of a colleague after a patient complaint.

It is understood he was one of 17 people to sign a petition.

Terry Skitmore, Mr Abdullah’s partner, said the letter was mistakenly attached to the back of the petition.

The nurse was charged with writing an “untrue letter” and not using the correct complaints procedure.

Theresa May says no to general election TV...