The plan for the bridge includes 270 new trees

A controversial garden bridge is to be built across the River Thames after the Mayor of London Boris Johnson approved the scheme.

The £175m footbridge will link Temple with the Southbank but has been criticised over its location and cost.

Actress Joanna Lumley came up with the idea for the bridge and it has been designed by London 2012 cauldron creator, Thomas Heatherwick. 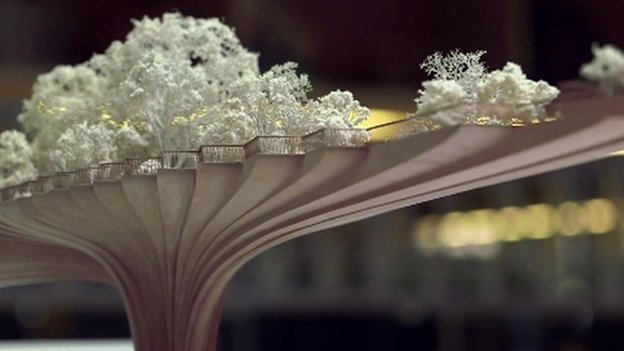 Construction could begin next year, the mayor’s office said.

It is estimated seven million trips per year will be made across the bridge.

Mr Johnson said: “The garden bridge will provide a fantastic new landmark for London whilst supporting regeneration and economic growth on both sides of the Thames.

“It will create a stunning oasis of tranquillity in the heart of our city and boost our plans to encourage walking in the city.”

Business group London First has questioned the mayor’s prioritising of the project.

Head of infrastructure David Leam said progress on tunnels and bridges proposed at Silvertown and Gallions Reach in east London had been “painfully slow”.

He said: “We’d like to see the London mayor applying a similar bit of elbow grease to getting crossings built east of Tower Bridge. In terms of economic growth, those are the priorities.”

The garden bridge project has previously been criticised by nearby residents and political opponents for its location and design.

Wife Swap to return for Brexit special on...