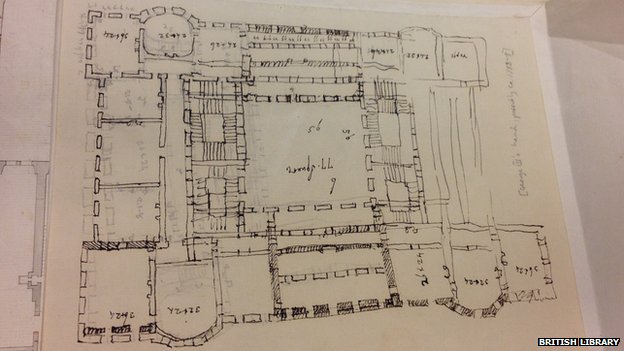 George III’s drawing is described as ‘rather savage’ in style

An eccentric architectural plan thought to have been drawn by George III during his period of “madness” has been discovered at the British Library.

It is part of a huge collection of papers put together by the King during his reign from 1760 to 1820.

The loose piece of paper was tucked inside a volume about the Palaces of Hanover in Germany.

The diagram of a building was drawn in ink over a pencil outline “in a rather savage way”, according to experts.

Peter Barber, head of map collections at the British Library, said the drawing, scribbled on the back of an order of service from St George’s Chapel in Windsor, was “not an ordered plan”.

“You see certain things which are at the very least odd and actually rather disturbing,” he added.

A grand central courtyard with no obvious means of access, surrounded by no fewer than four monumental staircases, was “perhaps a little excessive, even for a Baroque monarch”, Mr Barber said.

Meanwhile, some of the rooms have no doors at all, and there is no way of getting from one room to the next. 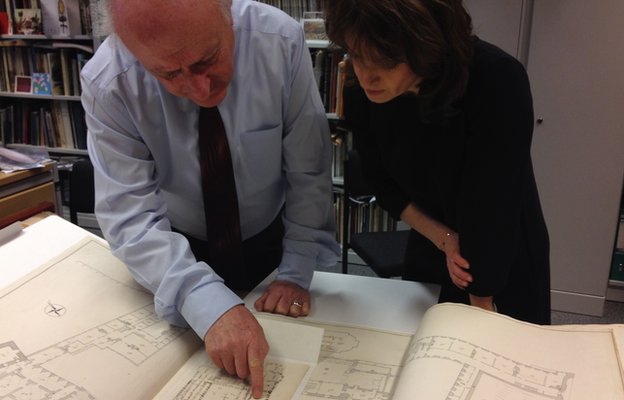 Mr Barber concluded that it was drawn when George III’s mind was disturbed.

Numerous theories have been given for the sovereign’s “madness”, from the blood disorder porphyria to episodes of mania corresponding to Bipolar depressive illness.

“It may be a unique survivor of that traumatic period of his life,” he said.