The Tate Modern gallery in London has unveiled the latest art commission to fill its vast Turbine Hall space.

The 24m (78ft) sculpture weighs 15 tonnes and is made of wood draped with swathes of brightly coloured fabric.

The sculpture, by the US artist Richard Tuttle, is suspended over the atrium and is intended to resemble aeroplane wings.

Tuttle said it was “the job of the artist is to try to find a reunion between the mechanical and the human”.

The wooden shapes of the sculpture, he continued, were designed to resemble aeroplane parts in order to “raise the issue of genocide”. 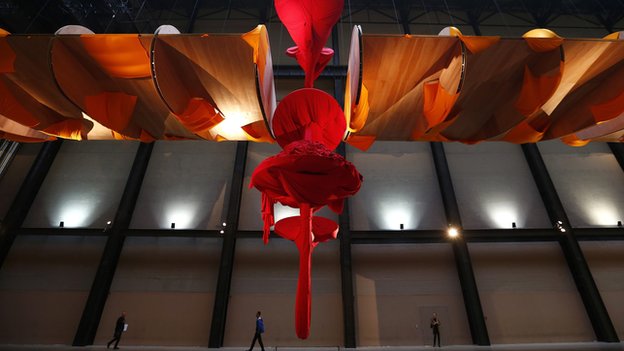 “I wanted to be a pilot and passed everything and then realised that they wanted me to fly over Vietnam at such a height and drop bombs on innocent children,” he went on.

“I’m born in the 20th Century and my soul, if you will, is a 20th Century soul. Sometimes I call this the first piece of the 21st Century.” 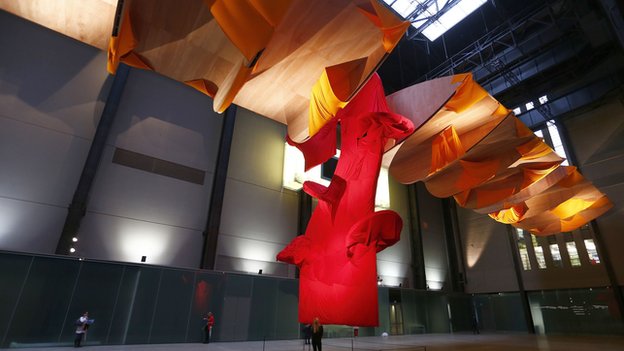 The work features 2,500 square metres of poppy- and marigold-coloured fabric from India

The Tate commission, which will remain on view until 6 April, ties in with a retrospective of the renowned sculptor and poet’s work at the Whitechapel Gallery in east London.

According to Tate Modern, the work “brings together three specially-made fabrics, each of which combines natural and man-made fibres.

“These are suspended from the ceiling as a sculptural form… to create a huge volume of joyous colour and fluidity.”

Depp's wife accuses him of assault

Downton Abbey movie 'could be filmed this year'