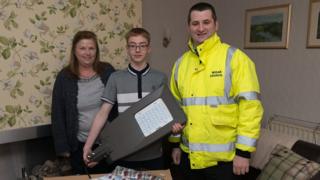 A boy who collects street lamps has had his Christmas lit up by an unexpected present from his local council.

Ben McKenna’s grandmother contacted Wigan Council to ask where she could buy the LED lights they have been installing across the area.

In a light bulb moment, the switched-on street lighting team decided to brighten Ben’s day with an unusual gift – a light in Christmas wrapping paper.

Best man who conned friends out of Prague...