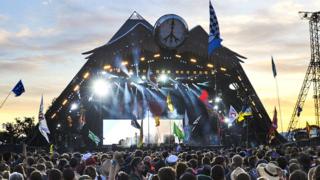 Standard tickets for next year’s Glastonbury music festival have gone on sale amid huge interest from fans.

Fans must have registered in order to buy the tickets, which cost £228 plus £5 booking fee.

The first batch of 15,000 tickets – for combined coach travel and festival entry – sold out in less than 20 minutes on Thursday.

The line-up will not be announced until next year, although Coldplay and Adele are among the favourites to headline.

Muse have also told Q magazine they would like to play.

Last month, festival organiser Michael Eavis told BBC Newsbeat he had booked the headliners for the next two years.

Bestival moving from Isle of Wight to Lulworth