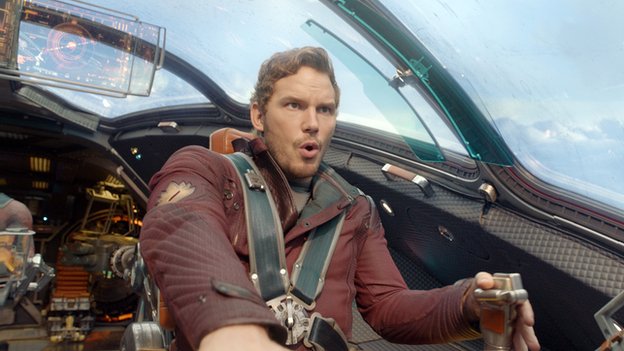 Sci-fi blockbuster Guardians of the Galaxy has stamped its authority on the US box office, becoming the biggest film of the year so far.

The Marvel release extended its run at the top of the movie chart, taking $16.3m (£9.8m) across the country’s Labor Day holiday weekend.

Captain America is the second biggest film of 2014 to date, followed by the Lego Movie.

Transformers is at number four on the annual list.

Over the bank holiday weekend, Guardians kept Teenage Mutant Ninja Turtles in second spot, with If I Stay remaining at three with takings of $9.3m (£5.5m).

The release took a modest $7.7m (£4.6m) and was outperformed by thriller As Above, So Below, which made its debut at number four.

Comedy Let’s Be Cops was fifth.

Guardians of the Galaxy entered the chart at number one at the beginning of August, before temporarily losing its crown to Teenage Mutant Ninja Turtles.

The space adventure stars Zoe Saldana and Chris Pratt, and also features the voices of Bradley Cooper and Vin Diesel.

A sequel to the Marvel Comics adaptation is expected to be released in 2017.

Despite the film’s success, the summer box office in North America is down on last year.

Paul Dergarabedian, box office analyst at Rentrak, said: “This summer was placed in the unfortunate position of being the follow-up to the biggest revenue generating summer of all time.”