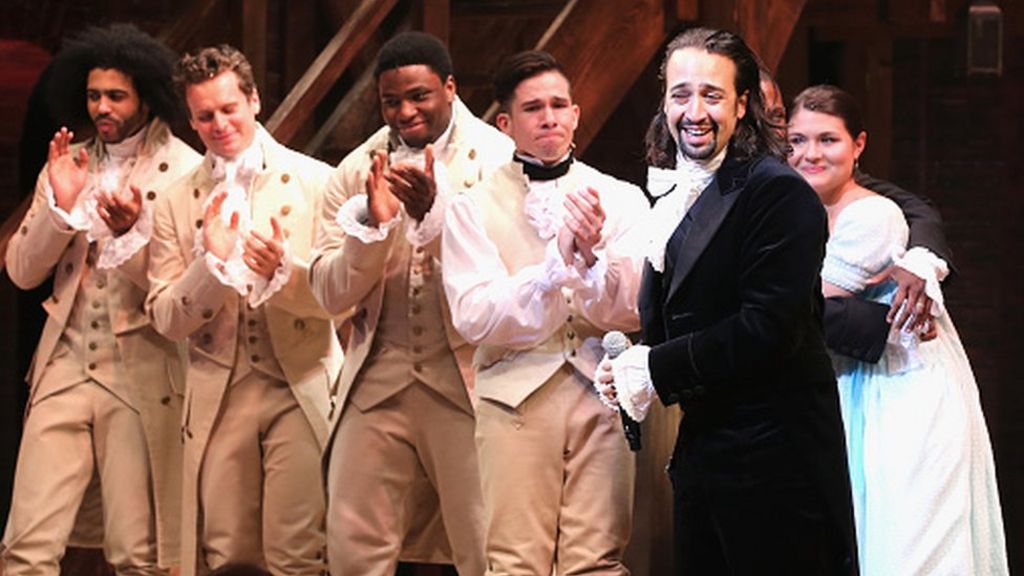 Hit musical Hamilton is set to dominate this year’s Tony Awards after gaining a record-shattering 16 nominations.

The previous record was 15 nominations, held jointly by The Producers and Billy Elliot.

The show, created by Lin-Manuel Miranda, tells the story of America’s birth and founding father Alexander Hamilton in rap and R&B style.

The Tony Awards, which celebrate the best of Broadway, take place in New York on 12 June.

Hamilton will compete in the best musical category against Bright Star, School of Rock, Shuffle Along and Waitress.

Shuffle Along – a musical about the staging of a famous musical revue bearing that name in 1921 – is the second most nominated show, with 10 nods in all.

The Eclipsed, The Father, The Humans and King Charles III are all up for best play.

Hamilton gained seven acting nods and is also up for best original score and best book, as well as several technical awards.

Both Miranda, who plays Hamilton, and Leslie Odom Jr, who plays his political rival Aaron Burr, are up for best leading actor in a musical.

Phillipa Soo, who plays Hamilton’s wife Eliza, is nominated in the best actress in a musical category.

The show has a strong presence in the featured acting categories, with nominations for Renee Elise Goldsberry, Daveed Diggs, Christopher Jackson and Jonathan Groff.

Jackson and Groff play George Washington and King George III respectively, while Diggs appears as both Thomas Jefferson and the Marquis de Lafayette.

Thomas Kail’s direction and the show’s choreography have also been shortlisted.

The show, inspired by a 2004 biography of Alexander Hamilton by historian Ron Chernow, has been a runaway success since it opened off-Broadway in February 2015.

It transferred to Broadway’s Richard Rodgers Theatre last August and has grossed more than $60m (£41.9m) in advance ticket sales.

Eurovision to be shown on US TV

Tinie Tempah pulls out of Mobo performance because...