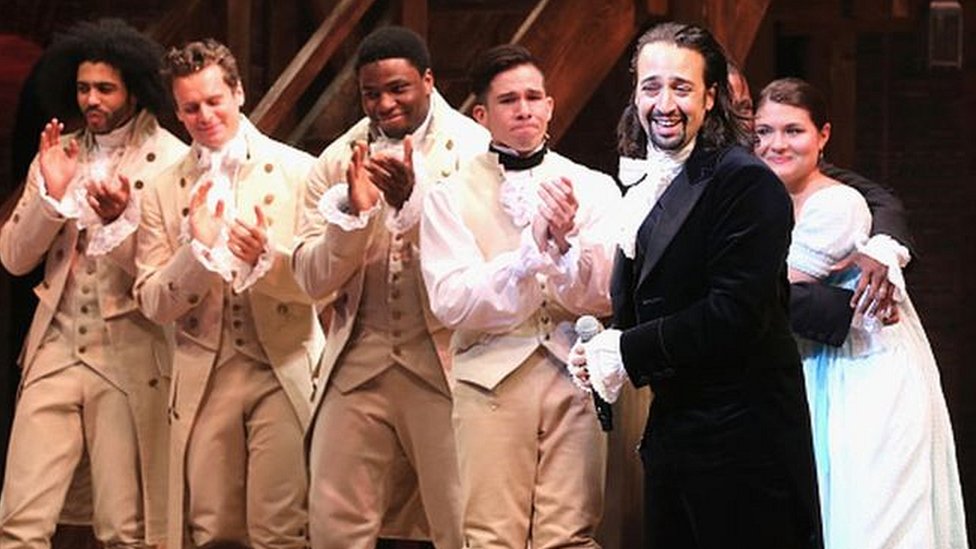 The hip-hop musical Hamilton looks set to dominate this year’s Tony Awards, which take place in New York on Sunday.

The acclaimed Broadway production, about the life of Alexander Hamilton – one of America’s founding fathers – has earned a record 16 nominations.

It is widely expected to win the coveted best musical title, as well as best musical actor for Leslie Odom Jr.

The awards, now in their 70th year, honour the best of Broadway theatre. Hamilton will be hoping to trump the unprecedented 12 Tonys won by The Producers in 2001.

Corden, 37, will present the awards from New York’s Beacon Theatre, where he won the Tony for best leading actor in a play in 2012 for his performance in One Man, Two Guvnors.

Hamilton, which won the Pulitzer Prize for drama earlier this year, has been hailed as “a landmark American musical”, garnering celebrity fans including Star Wars director JJ Abrams, Jay Z and President Obama.

In addition to blockbuster ticket sales, the album of the show is the highest-selling cast recording for 50 years, picking up this year’s Grammy Award for best musical theatre album.

The production is the brainchild of Lin-Manuel Miranda, who wrote and stars as Alexander Hamilton in the show – and its notably multi-racial cast has marked it out as the antidote to this year’s OscarsSoWhite furore.

The production has earned seven acting nominations, including nods for both Miranda and Odom Jr, who plays his political rival Aaron Burr.

After a slew of critically-adored performances, many commentators believe black actors could take all four Tony awards for performances in musicals.

Among them, Britain’s Cynthia Erivo is tipped to win best actress in a musical for her leading role in The Color …read more

The Great British Bake Off: Viewing rises by...

Mel Giedroyc: Why I turned down Strictly Come...

Kim Kardashian will appear in the all-female Ocean's...