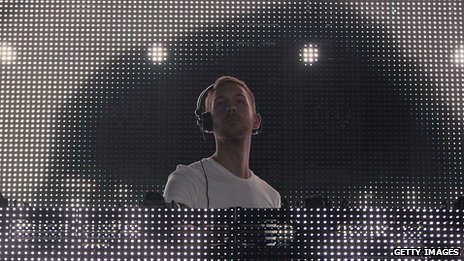 Alongside his solo number ones, he has also enjoyed two chart toppers with Dizzee Rascal – Dance Wiv Me – and Rihanna’s We Found Love.

Other new entries on the chart included club track Walking with Elephants by house producer Ten Walls at number six.

Harris was recently named the most successful songwriter in the UK singles chart for the second year in a row.

The Scottish singer, songwriter and producer wrote such songs as Call My Name by Cheryl Cole and Rihanna’s We Found Love, which were big sellers in 2012, as well as a string of his own hits.

The list was compiled by trade magazine Music Week.

Meanwhile, Sam Smith’s In the Lonely Hour held on to top spot in the UK Top 40 albums chart.

Robert Plant’s latest album, Lullaby and the Ceaseless Roar, was the highest new entry on the album chart at number two.

It is the 10th solo offering from the Led Zeppelin star.

Ed Sheeran held firm at number three with X, followed by Royal Blood – nominated for the Mercury Prize – at 4 with their self-titled debut.

Other Mercury-nominated acts benefitted from their inclusion on the shortlist with Kate Tempest’s Everybody Down scoring its highest position to date at 115 and Nick Mulvey’s First Mind, which climbed 68 places to number 60.

Higher up the chart, George Ezra rounded out the top five with Wanted On Voyage, while Bob Marley & The Wailers’ 1984 greatest hits collection, Legend, climbed 42 places to number seven.