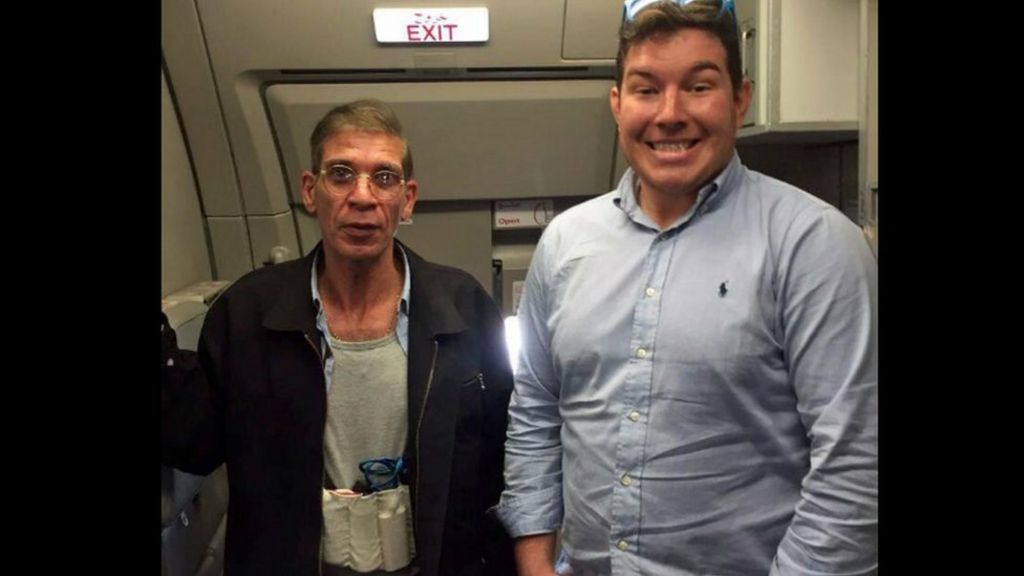 A man who posed for a picture with a hijacker wearing a suspected suicide belt has said he was trying to get a better look at the device.

The image of Ben Innes, grinning next to his captor on the Egyptair flight, has gone viral on social media.

Mr Innes, based in Aberdeen, also told the Sun newspaper he wanted to “stay cheerful in the face of adversity”.

The hijacker, who forced the plane to land in Cyprus, was later arrested and the suicide belt was found to be fake.

Oil worker Mr Innes, who is originally from Leeds, was a passenger on the Airbus A320 on Tuesday when a man, named by Cypriot officials as Seif Eldin Mustafa, threatened to blow up the aircraft.

The picture was taken during a five-hour standoff after the plane was diverted to Larnaca airport.

Mr Innes told the Sun: “I’m not sure why I did it – I just threw caution to the wind while trying to stay cheerful in the face of adversity.”

He said the photo, which was taken by a member of the cabin crew, was the “best selfie ever”.

The plane was carrying at least 55 passengers, including 26 foreigners, on an EgyptAir domestic flight from Alexandria to Cairo.

Most of those on board were freed shortly after the plane landed at Larnaca but the hijacker held seven people hostage before the incident came to a peaceful conclusion.

Mr Innes said part of his motivation was to find out more about the suspected explosive belt.

How the hijacking unfolded

No nationalisation for steel, says Javid

Driverless cars 'could lead to complacency'