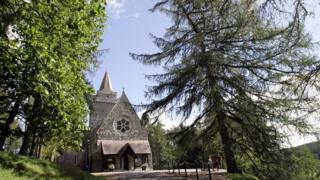 The Queen, who is the Supreme Governor of the Church of England, attends services at Crathie Kirk – which belongs to the Church of Scotland

An “historic” agreement has been reached between The Church of England and The Church of Scotland – marking their first formal working arrangement.

A document – the Columba Declaration – will be debated by the ruling bodies of both churches next year.

It commits the churches to “grow together in communion and to strengthen their partnership in mission”.

Regional divide in smoking in pregnancy