Hitler’s artworks are generally considered to have limited artistic merit

The 1914 painting of Munich’s city hall was put up for sale by two elderly sisters. Their grandfather had bought the painting in 1916.

A private buyer from the Middle East, who wished to remain anonymous, bought the work, auction house Weidler said.

Experts generally consider Hitler’s artworks to be of poor quality.

The auction was held in the central German town of Nuremberg.

The auction house said bidders from four continents had expressed an interest in the work. 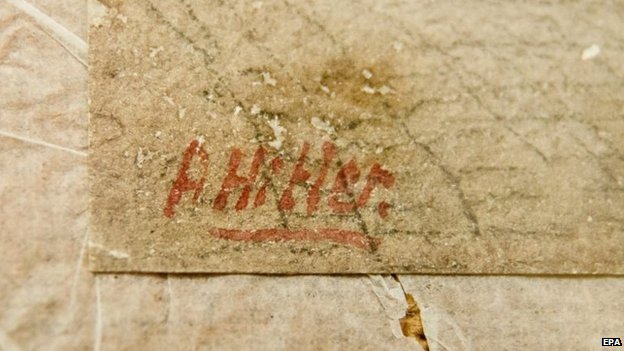 The signature “A. Hitler” could be seen on the back of the painting

The original bill of sale was included with the painting, which contributed to the relatively high selling price, auction house director Kathrin Weidler said.

The sellers would donate 10% of the proceeds to a charity that helped disabled children, Ms Weidler added, according to Reuters news agency.

Previous sales of Hitler’s art have caused controversy, and been criticised by some relatives of Holocaust survivors.

As a young aspiring artist, Hitler sought admission to the Vienna Academy of Fine Arts, but was rejected.

He became military and political leader of Germany from 1933 to 1945, launching World War Two and causing the deaths of millions, including six million Jewish people under Nazi rule.

Should You Buy REBOOT GAMES? – Inside Gaming Podcast!

Cilla to be buried in Liverpool

Eurovision: Russia will not broadcast contest after Ukraine...