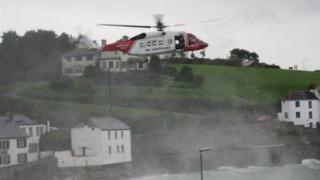 Man drowns in Portmellon trying to save dog from sea

A coastguard helicopter was involved in the rescue

A holidaymaker has drowned after trying to rescue one of his dogs from the sea in Cornwall.

The man got into difficulties at Portmellon near Mevagissey while walking with his pets at around 11:00 GMT, said Devon and Cornwall Police.

Other members of his family tried in vain to help and were rescued from the water by coastguards including a helicopter crew.