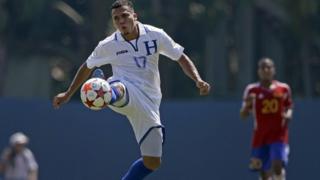 From the section Latin America & Caribbean

He was shot dead in a car park while on holiday in his hometown of La Ceiba on the country’s Caribbean coast. The motive for the attack is unclear.

The 26-year-old midfielder for Olimpia, in the capital Tegucigalpa, played for Scottish giants Rangers until January.

Honduras is plagued by gang violence and has one of the highest murder rates in the world.

Osman Madrid, director of the Honduran football federation, said it was a “tragic death that the national sport mourns”.

No arrests have been made. Police ruled out robbery as a possible motive because Peralta had not had his belongings taken.

He represented Honduras at the 2012 Olympic Games in London but was ruled out of the 2014 Brazil World Cup squad through injury.

He had been due to play for the national team in a friendly against Cuba next week.

Christmas flag flyer threatened with fine because of...