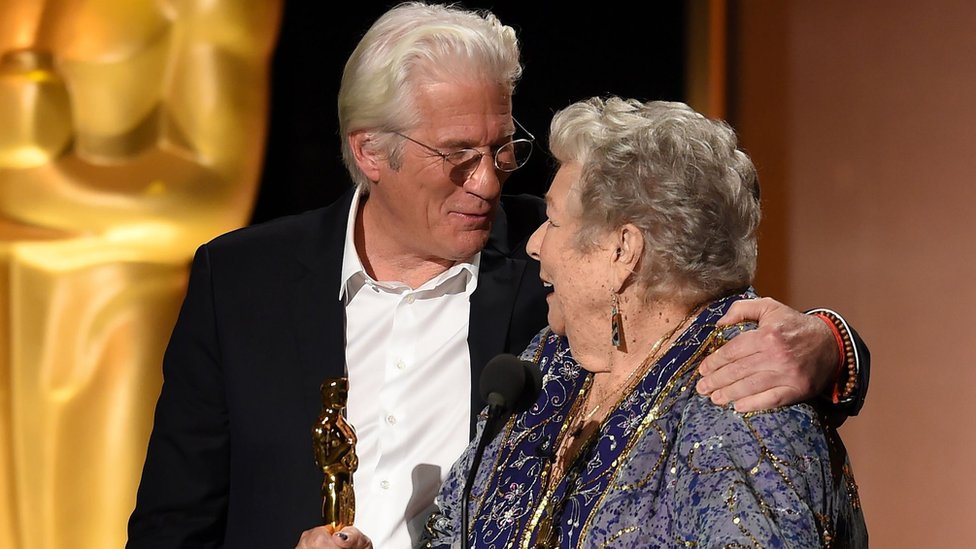 British film editor Anne V Coates has been given an honorary Oscar, 53 years after her first Academy Award.

The 90-year-old previously won an Oscar for Lawrence of Arabia in 1963.

She was hailed as “a trailblazer” by Nicole Kidman at the Governors Awards, the Academy’s dedicated ceremony for honorary awards.

Her career has spanned the 1952 adaptation of Charles Dickens’ The Pickwick Papers and last year’s Fifty Shades of Grey.

Stars paid tribute to Coates at the ceremony, including Richard Gere, who appeared in the 2002 film Unfaithful, which she edited.

Australian star Kidman said: “Anne V. Coates is not a great female editor, she is a great, great editor. She’s not trailblazer for women, she’s a trailblazer for all of us.

“Anne has left her mark on some of the greatest films of all time.”

Anne V Coates: A life in filmShe began her career working on religious films before getting a job at Pinewood Studios by slightly exaggerating her experience
After winning the Oscar for best editing in 1963, she was nominated four more times, for Becket, The Elephant Man, In the Line of Fire and Out of Sight.
She also worked on the 1974 movie of Murder on the Orient Express, Richard Attenborough’s Chaplin and Erin Brockovich.
She was also nominated for Bafta Film Awards four times, and in 2007 received a Bafta Academy Fellowship.

Born in Reigate in Surrey in 1925, Coates has continued to work up until last year, when she edited the film adaptation of EL James’s racy international bestseller, Fifty Shades of Grey.

She told the LA Times last week that she had tried to make the film more raunchy.

“They were worried they wouldn’t get the R rating. I would have had her trussed up like a suitcase and hoisted to the ceiling,” she said.

Chan made his film debut at the age of eight, before starring in …read more