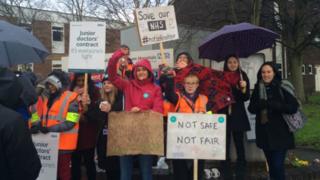 A hospital has ordered its junior doctors to work as thousands more strike across England.

Sandwell Hospital in West Bromwich declared a “level 4” incident after a “very high” number of admissions.

Medical director Dr Roger Stedman said the hospital had decided to require trainee doctors due on shift to attend as normal during the strike.

The British Medical Association (BMA) said its members should continue with industrial action for the time being.

In a statement, it said: “Junior doctors should continue with industrial action until NHS England has confirmed and the BMA has agreed – via the agreed escalation process – that …read more