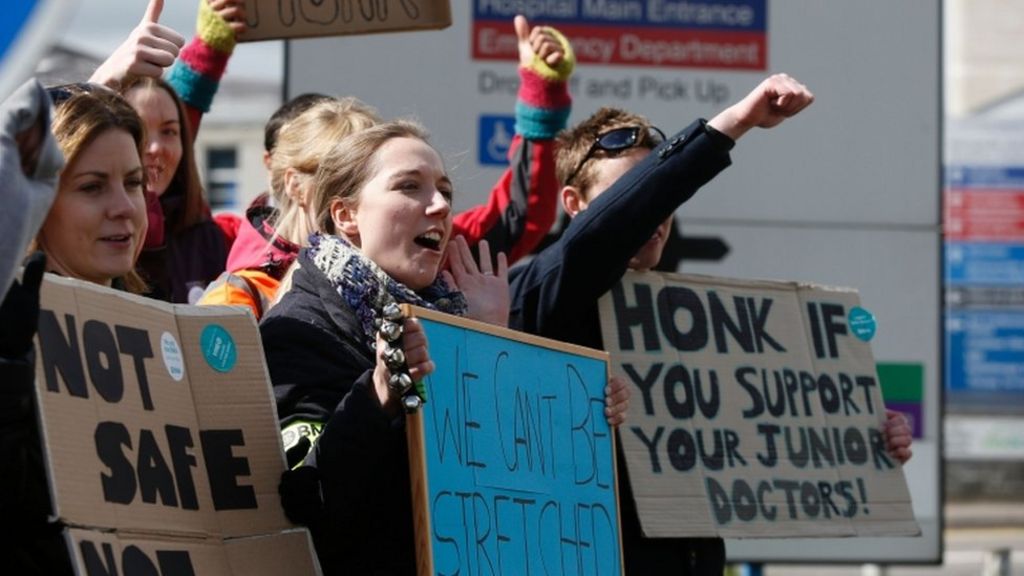 Hospitals in England are coping well with the all-out strike by junior doctors – the first in the history of the NHS – health bosses are reporting.

Junior doctors walked out at 08:00 BST on Tuesday and are due to return at 17:00 BST with a second day of action due on Wednesday.

A number of hospitals told the BBC services have run smoothly – with some saying they were quieter than normal.

But there are fears demand could surge once the strikes are over.

Meanwhile, figures released by NHS England showed 78% of junior doctors due in work did not turn up. The British Medical Association membership covers about 80% of junior doctors, although non-members can still strike.

In preparation for the stoppage, hospitals cancelled over 100,000 routine appointments and nearly 13,000 non-emergency operations.

This has allowed them to redeploy consultants, middle-grade doctors and nurses into emergency services, such as A&E, maternity and intensive care.

GPs were also asked to keep more appointments than normal free for last-minute urgent calls, and NHS 111 staffing has been boosted to allow it to deal with extra calls.

NHS England had likened it to planning a “military” operation.

The planning seems to have worked with no hospital triggering the emergency escalation procedure which allows them to call junior doctors back into work if they felt they could not cope.

Ipswich Hospital chief executive Nick Hulme said his trust had been coping well – and more doctors than expected had come into work, 23 out of 122, suggesting an all-out strike had been a “step too far” for some.

But he said both sides needed to come back together to resolve the dispute “quickly”, saying it was getting “really difficult” for the NHS to cope with the backlog of postponed operations.