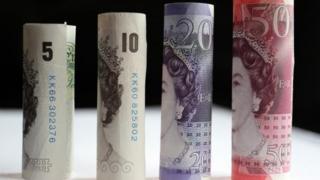 The UK’s recent growth, employment progress and deficit reduction have been “strong”, the International Monetary Fund (IMF) has said.

Underlying economic vulnerabilities have been addressed, and steady growth looks set to continue, it said.

But high household debt, a “strikingly large” trade deficit and high government debt are still risks to the economy.

It also warned about uncertainty over whether the UK would stay in the EU.

“Life is about risk, but what we are seeing is a very strong performance from the British economy,” the IMF’s Christine Lagarde told BBC business editor Kamal Ahmed.

She gave an upbeat assessment of the UK economy, saying that the UK was in a very strong position at the moment.

Growth has outstripped other major economies, the unemployment rate has fallen, employment is at a high, the fiscal deficit has been reduced, and financial sector resilience has increased, the IMF said in a report.