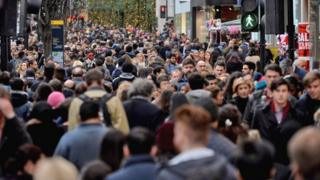 Thousands of shoppers have descended on London in a bid to bag a Boxing day bargain.

The New West End Company, which represents 600 retailers in the area, said stores could earn more than £100m over the next three days.

It said 50% of Boxing Day shoppers in the capital were tourists, with most coming from China, the Middle East and the US.