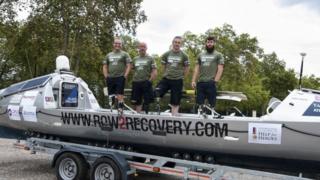 The amputee rowers will be competing against 25 others teams

Four ex-servicemen are rowing across the Atlantic in a bid to become what is believed to be the first all-amputee team to make the trip.

The veterans, led by Cayle Royce, have set off from the Canary Islands.

They aim to row the 3,000 miles in under 55 days as part of the Talisker Whisky Atlantic Challenge.

The Row2Recovery group are competing against 25 other teams in the race, which will end in Antigua in the Caribbean.

‘Three legs between us’

The race was scheduled to start …read more

Lincoln City fan from Australia given ticket for...