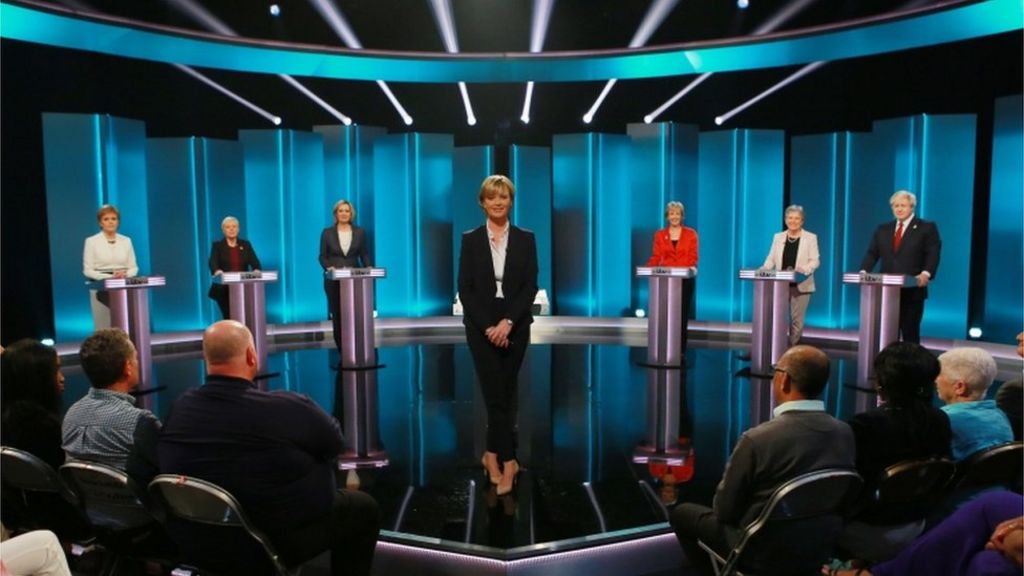 Politicians have claimed the Remain campaign is “fear-based” and Leave “based on falsehoods” in a ITV debate.

Boris Johnson, Gisela Stuart and Andrea Leadsom accused Remain of a “miserable” campaign and getting “personal” while avoiding the key issues.

Angela Eagle, Nicola Sturgeon and Amber Rudd accused them of “an absolute whopper” by claiming the cost of the UK’s EU membership was £350m a week.

The debate is being moderated by ITV’s Julie Etchingham.

It is being held hours before the deadline for registering to vote and two weeks before polling day – 23 June.

In short opening remarks, Mr Johnson, for Leave, sought to strike a positive note in his opening speech urging voters to “believe in ourselves” and “take back control” while his Conservative colleague Amber Rudd – making the case to remain in the EU – said, “as a mother”, she did not want to take the “risk” of leaving the EU with her children’s future.

The first question from the audience was about immigration – with Andrea Leadsom, for Leave, saying people were “genuinely struggling with access to public services” and the Remain side had “no answer” to that.

Labour’s Angela Eagle, for Remain, said there were no “simple solutions” to the issue but Nicola Sturgeon said “our economy would suffer if we pull up the drawbridge”. The answer to pressure on public services is to invest more in them, she added.

But the debate heated up over the controversial claim by the Leave camp that the UK sends £350m a week to the EU – which critics point out does not include the UK’s rebate. Ms Eagle, pointed at the Leave campaigners telling them to “get that claim off your bus” while claiming it was an “absolute whopper”.

But Ms Leadsom, for Leave, said when people gave their salaries they did not deduct NI and tax and the rebate and EU subsidies were controlled by the EU: “£10bn a year goes to the EU which we never see again,” she said.

There were various references to Mr Johnson’s reported designs on becoming the next Conservative leader.

“I think you only care about one job and that’s your next one,” said Ms Eagle to Mr Johnson.

Coastal pollution 'eye in the sky'