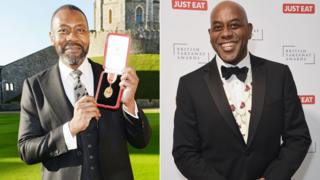 The gaffe was picked up by a number of viewers, among them Sanjeev Bhaskar, who suggested the broadcaster had “misunderstood diversity issues”.

ITV News blamed the mistake on “an error in the production process”.

Sir Lenny said he was “very thankful” to receive a knighthood from the Queen for services to drama and charity.