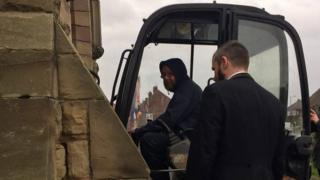 About 70 people turned up for the funeral, but the doors to the chapel were locked

A council has apologised after a digger had to be used to prise open a chapel’s doors for a funeral when an employee failed to turn up with the keys.

About 70 mourners gathered at Mexborough Cemetery in Doncaster for the funeral of 92-year-old Royal Navy veteran Douglas Barratt on Wednesday, but were locked out for 40 minutes.

The digger, used by gravediggers, then forced open the doors of the chapel.