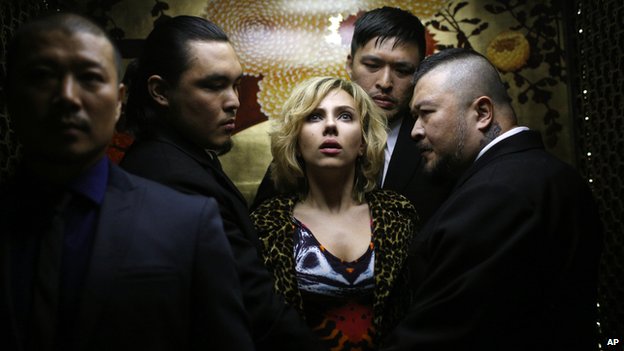 Scarlett Johansson plays Lucy, who gets involved in a drug deal that goes wrong

Directed by Luc Besson, Johansson plays a woman whose brain becomes extremely powerful after taking a strange new substance while acting as a drug mule.

It took £3m while The Inbetweeners 2 took £2.37m in second place, two weeks after scoring the biggest box office opening of the year so far.

Marvel’s Guardians of the Galaxy, starring Chris Pratt, was in third.

The weekend’s other new entries included storm-chasing adventure Into the Storm, supernatural police drama Deliver Us From Evil and Daniel Radcliffe rom-com What If in the fourth, fifth and sixth spots respectively.

Doctor Who fans flocked to special cinema screening’s of Peter Capaldi’s first full-length adventure as the Time Lord on Saturday, putting it in eighth place with takings of £523,000.

The plot was inspired by the myth that human beings use only 10% of their brain power.

Glasgow gets ready for MTV EMAs