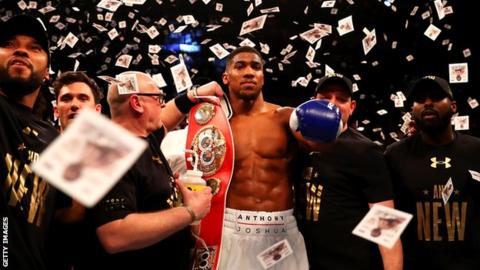 The Briton floored his American opponent with a peach of a right-hand counter and after Martin was knocked down again, the referee called a halt.

Joshua is also just the third man to win a pro heavyweight world title while still a reigning Olympic champion.

Champion Martin, who was making the first defence of the title he won in January, entered the ring wearing a tall crown, a fur-trimmed, velvet cape and a smile as broad as his shoulders. But the smile soon disappeared.

Some thought previously unbeaten Martin, 29, would trouble Joshua with his southpaw stance – he was the first left-hander Joshua had faced in the paid ranks – but he barely threw a punch in anger.

It took Joshua half of the first round to find his range but when he did, he landed with three or four big right hands that appeared to rattle the champion.

The challenger staggered Martin with a sweet left hook early in the second, before a beautifully-timed right put him on the seat of his pants.

Martin rose at eight but after another massive right put him down again, referee Jean-Pierre van Imschoot counted him out on his feet, one minute and 32 seconds into the round.

Most graduates 'in non-graduate jobs'