Boyzone star Ronan Keating has called making his West End debut in musical Once “the most liberating experience”.

Speaking after his official first night at London’s Phoenix theatre, the Irish singer said he was “all over the place” at the start of Tuesday’s performance but was “feeling great” by the end.

“The stress and fear when I walked out was overwhelming,” he admitted. “But once I got into it, it was wonderful.”

Keating will appear in the adaptation of the 2007 film until 21 March.

The 37-year-old plays a character known simply as ‘Guy’ in this romantic tale of a Dublin busker who meets and makes music with a young Czech mother.

Keating, who has enjoyed success as a solo artist as well as with his Boyzone bandmates, said appearing in Once was “a very different monster”. 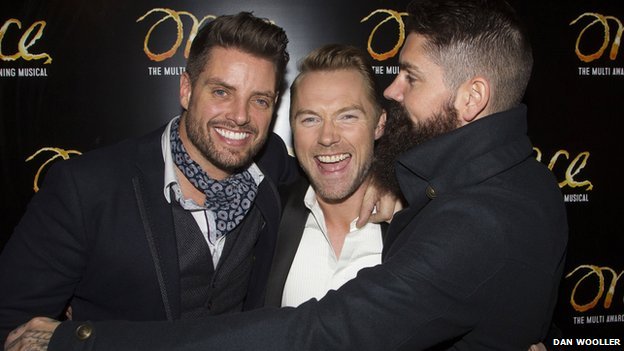 “You’re very exposed on stage,” he said. “I’ve done a week in the show, and every single night you walk out feeling naked.”

The singer said he had not considered musical theatre before being offered the show, regarding it as the domain of his late bandmate Stephen Gately.

Gately, who died in 2009 at the age of 33, combined his pop career with roles in West End musicals including Joseph and the Amazing Technicolor Dreamcoat and Chitty Chitty Bang Bang.

“I never thought I’d do a musical; that was Steo’s gig,” he said. “That was his thing and he was amazing at it, but it wasn’t for me.